Casio is a name you may be familiar with, they manufacture office equipment, musical instruments, watches and more. It doesn’t sound all that attractive from a heritage horology side of things.

But Casio G-Shock watches have been widely used by USA government personnel in the armed forces, first respondents because they are built to last and they are cheap to buy and there is virtually no maintenance. Most G-shock watches are now solar powered and their battery lasts for ages. They stick to digital timers and quartz movements for affordability, ruggedness, and accuracy, not exactly the automatic watch enthusiasts wet dream.

But Casio’s G-Shock series has eloquently carved out a name for themselves as a cheap, quality, everyday beater that does the job. Starting at $70, and goes up with additional functionality like GPS capability and style choices goes into the thousands of dollars, especially for the MR-G, MTG series. But today we are going to be looking at the G-Steel watch.

What is G-Shock G-Steel Series?

As the name may suggest, G-Steel its the stainless steel version of the plastic G-shocks, and they have most of the same functionality but with a slick tough steel construction and retail from $230 depending on where you purchase and which modal number it is.

In all honesty, I never liked the plastic-fantastic G-shocks because they weren’t my style. I always wanted a stainless steel design, so the day I found an announcement about “G-Steels” on Casio’s website my eyes lit up. 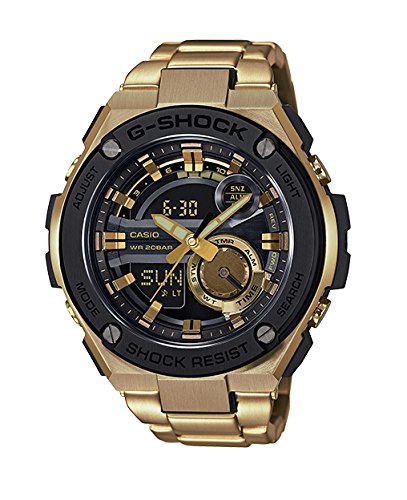 They have that unique Hublot-esque bezel, IWC ingenieur style steel casing, and overall AP styled design with the rubber strap. I spent hours, perhaps even a week browsing and comparing the different style choices. After much thought, I settled on the gold with the black bezel with the discreet G-shock branding on the bezel. Unfortunately, it was the only modal that included the steel bracelet which I’m no fan of. The bracelet made the watch more expensive by an extra $200 than the models with rubber straps.

Next up, replacing the rubber G-Shock straps. I found a seller on Ebay who was selling the authentic G-shock rubber straps and it cost me an extra $60 which was a little too much for what I wanted to initially pay for in this watch. But I had a vivid image in my mind on how I wanted it to look.

It took 2 weeks to get the package from the USA to Europe, I used a service called Shopandbox.com to avoid all the customs fees. PRO TIP: How To Bypass Paying Customs Services:
Get it wrapped like a gift and declare it to be the value under $50. The only problem with the method is, that if it gets lost or damaged then the insurance will only cover the declared price.

The person over at shopandbox did a wonderful job in masking my watch purchase as an early Christmas gift “from a friend”. You can’t see it in the picture, but she packed in some tasty treats which made the whole experience a little more authentic.

For a 50mm watch, it looks good on small wrists, and the rubber straps were a good aesthetic and practical move for this watch. That said, I wear it every day, to work, and in the gym and I’ve had a few passing compliments on the watch.

However, my only gripe I have with the G-Steel GST210GD-1A is the dial readability. I personally don’t have the best eyesight and need to wear glasses but at times the watch is hard to read especially in sunny situations where the glare over powers it. The digital timer and date window blend in too much with the gunmetal dial. There is a lot left to be desired in terms of the readability on this watch.

Another small pet peeve of mine is the overbearing whitewash intensity of the light function. The small light is located at the 12 o’clock position, and when it’s engaged you feel like someone is shining a torch right into your eyeballs, especially at night.

It would be nice to see Casio make it evenly distributed light function on the dial with less blinding intensity. The plus side is, its exactly like a torch and it comes in handy if you can’t find the keylock to your door.

How I Feel About It 12 Months Later I wear this watch and rotate in and out depending on how I feel. It is my go-to beater watch when I am doing sport and outdoor activities.

But overall I am happy with my G-Steel purchase, I have not had a single problem with anything on this watch. I have taken it swimming in the sea, swimming pools, in the gym, and showered with it.

Its had its fair share of knocks and dings. It’s been dropped, smashed into doors and so far it has held up nicely against the elements of life.

Would I Change Anything

The watch is decent value, perhaps a little more expensive with the additional straps and its the modal that more expensive because it comes with the steel bracelet. If I had the chance again I would have purchased the GSTB100TFB-1A because it looks easier to read, the dial is more clearly laid out and would gladly give up some of the digital timing capabilities for the style.

However, it is a little more expensive and it comes in a $750 price tag. I think personally that you can get a decent automatic watch for that money, however if Casio is on your radar I would say its a good purchase 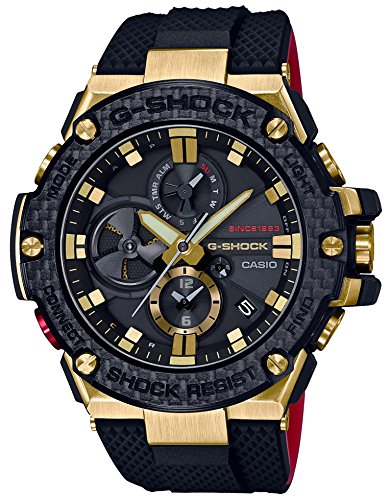 My Wifes Impression Of The G-Steel

She loves this watch over all the other watches I own. She did however dislike the steel bracelet that it came with and praised me on my decision on replacing it with the rubber straps.

Conclusion on the G-Shock G-Steel

At the time of writing my review, they have two generations of G-shock G-Steels ranging from low tier $200+ dollar mark to the higher $700 dollar mark. The G-Steels have “tough” written all over them, and are built to take a thrashing. If you are like me and you’re not a fan of the traditional plastic G-Shocks and don’t mind spending the extra coin. Then the Casio G-Steel series is the watch for you.

Feel free to wear it every day for any activity without the worry of damaging it. Its also a watch that be worn just about anywhere in most style situations. I have received numerous positive comments from fellow watch enthusiasts and many dont know that the G-Steels existed.