Glycine is a Swiss watchmaking company that started in the 1900s during the First World War. They’re originally makers of military and aviation watches before they started venturing into other categories.  Surprisingly, one of their most popular models is the Combat Sub Automatic which is a diver’s watch. 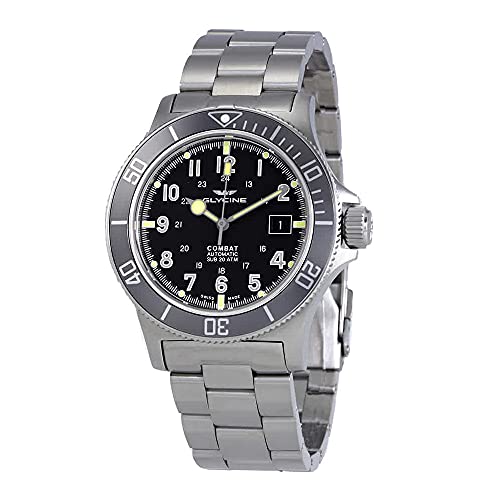 Its case is made of stainless steel which is the material suited for water activities. It also has a unidirectional rotating bezel which has a luminous triangular pip at the 12 o’clock position. The watch also features a triple-coated, scratch-resistant sapphire crystal and a solid case back which both reinforce the watch’s capability to withstand high underwater pressure.

The Glycine Combat Sub is water-resistant up to a depth of 200 meters which is similar to what luxury dive watches offer. Thanks to the luminescent hands and markers, you can clearly read the time even when you’re in areas with low-light conditions.

The Glycine Combat Sub looks a lot like the Rolex Submariner since it can be considered a homage timepiece. Its hands almost look like the Mercedes-style design of the Submariner, but without the three-armed symbol in the center.

The dial is available in either blue or black matte finish. The color combination of the hands and the dial were carefully selected by Glycine to have a significant contrast.

On the dial, you can see the Glycine logo at the 12 o’clock position. The date aperture at the 3 o’clock position differentiates the Combat Sub from the Submariner because of the former’s lack of magnified window. This doesn’t make the date any less visible, though.

The Glycine Combat Sub has a 25-jewel, GL224 automatic movement with a frequency of 28,800 vibrations per hour.

The Glycine Combat Sub’s similarity to the Submariner is one of its main selling points. For those who want an alternative to the luxury model, the Combat Sub is a good piece to consider. It has all the basic features you need on a diver’s watch, it’s made of quality materials, and it’s aesthetically stunning as well. The best part is that you don’t have to break the bank to get this as its target is the mid-range market.

You can get the Glycine Combat Sub for only $600. This is a reasonable price considering you’re getting a legitimate diver’s watch with almost the same features as the models offered by luxury brands. The Combat Sub isn’t one to be trifled with when you look at what it offers to users.

If you’re looking for a mid-range diver’s watch that will fit your budget, the Combat Sub is one reasonably priced timepiece you can wear anywhere you go.