The Men in Black franchise is well-loved by fans for its good mix of action, drama, and humor. There’s also the hi-tech environment and gadgets that you’d wish they exist in the real world.

The watches worn in the movies caught the attention of many viewers. Ever since the first installment in the franchise, actors were wearing peculiar timepieces that seem to have been made exclusively for the movies. The great news is that they’re actual watches you can buy even if you’re not part of the intergalactic, crime-fighting organization.

What are The Men in Black Watches?

Now, with the latest Men in Black movie in the film franchise hitting theaters, it’s time to revisit the watches that became part of the iconic series.

With the addition of Tessa Thompson to the MIB franchise, you think she ought to have her oddball watch as well. The watchmaker Hamilton agrees which is why they released the Men in Black watch made mostly for women: the Ventura Quartz H24411732. It has a slimmer form and thinner strap, perfect for people with small wrists. 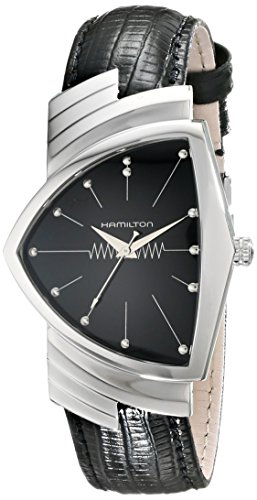 The Ventura Chronograph was seen worn by Agent J, played by Will Smith, in the first and second installments in the franchise. This Men in Black 2 watch is perfect for the film because of its odd, triangular shape. The addition of chronograph subdials made the watch even more ultramodern.

The 32mm Ventura Chronograph has a stainless steel case, a synthetic sapphire crystal, a black dial with dot hour markers and silver-tone hands, a calfskin leather strap, a date window, and an ETA Caliber 251.471 quartz movement. It also has 3 chronograph subdials with 60-second, 30-minute, and 1/10th-second scales. 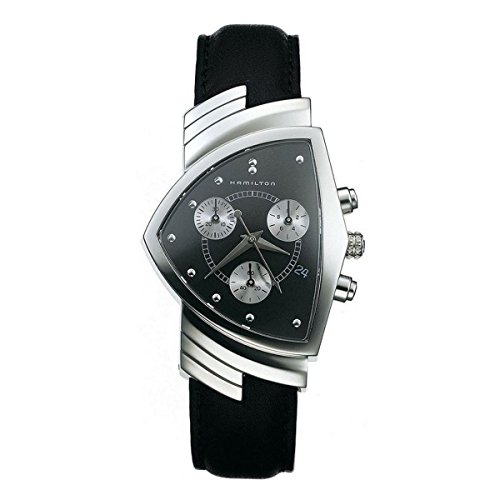 A new addition to the MIB franchise calls for another eccentric but elegant watch. Hamilton provided the MIB: International film with its new Ventura Auto H24515591 which was seen worn by Chris Hemsworth.

The 38mm Ventura Auto has a stainless steel case, a scratch-resistant sapphire crystal with anti-reflective coating, an exhibition case back, a leather strap with fold-over clasp, a brown skeleton dial, luminescent hands, and a calibre H-10 automatic movement. 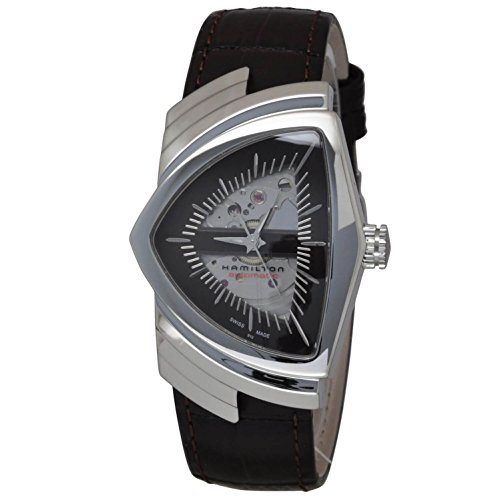 The first Ventura model was featured in the first installment of the franchise and has become known as the Men in Black watch ever since. Its futuristic design fits the theme of the film that it’s like a match made in heaven. In honor of the first edition, Hamilton re-released a revamped version of the Ventura model: the Ventura XXL.

The 46mm Ventura XXL is a Men in Black 3 Watch that features a stainless steel case, an anti-reflective sapphire crystal, a transparent case back, a rubber strap with fold-over clasp, luminescent hands, and an ETA 2824-2 automatic movement.

The Ventura XXL was released as a limited timepiece for the MIB 3 movie. There’s also an all-black version of this model which was released to commemorate the 75th birthday of Elvis Presley. 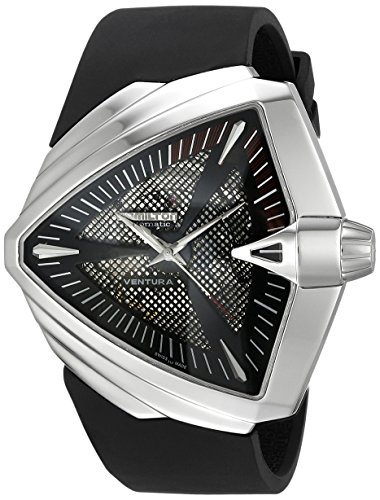 The Ventura models are for people who love the MIB franchise. These Men in Black watches are a beauty to behold with their unconventional but elegant style that can be worn on any occasion. Hobbyists will also love to add this to their collection because of the avant-garde design unseen in any other brand.

The Ventura models prove to be an unconventional collection with its triangular shape and futuristic look. Nothing’s more fitting than them, though, to be used in a movie franchise where heroes solve galactic problems with space-age technology.

If you’re looking for an alien-looking timepiece to wear, you won’t regret getting one from the Hamilton Ventura collection.