Victorinox INOX Watch Review – Is Is The Swiss Army Knife Of Watches?

When it comes to wrist presence, the first things that come to mind are watches from G-Shock, Seamaster PLOPROF, Casio Pro Trek, Timex Expedition, and Seiko Prospex series. What people often forget is that there’s another entry to this line of big watches: the Victorinox INOX model.

What’s The Victorinox INOX Known For?

The Victorinox INOX is known for its hulk-like appearance that looks like it was originally designed to be a tank. But despite the aggressive appearance of the accessory, it has a somewhat subdued tone that gives the impression that it’s a beast hiding in plain sight.

The first thing you’ll notice about the Victorinox INOX is the size and weight of the accessory. For a large piece of metal, it weighs just right on the wrist – not too heavy that you’ll feel it after wearing it for some time, but also not too light that it feels flimsy.

According to Victorinox, the INOX model has been tested under different conditions that sound almost insane and unbelievable. The company said that they tried to put it for two hours in a washing machine, exposed it to fire for a prolonged period, froze it inside a refrigerator, and ran it over with a tank. Whether these tests are true or not, you can rest assured that the Victorinox INOX will stand the test of time and remain reliable even when subjected to intensive use.

And that’s not all! As per company testing, it’s said that the Victorinox INOX can withstand up to 8 tons of pressure. Not that you’ll put it under a truck just to see if it will still work, but it’s good to know that the watch is built to handle rough usage. 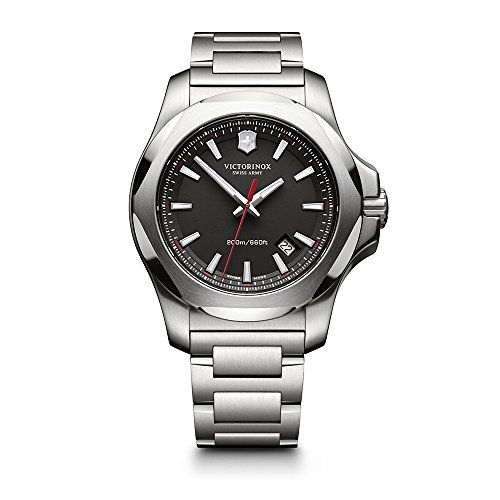 The Victorinox INOX weighs around 135g which perfectly matches its size that measures 43mm wide and 14mm thick.

The case is made of high-grade stainless steel that can withstand drops from 10 meters high. This means you can “accidentally” drop the watch from the second floor of a building and expect it to still be working after the experiment.

Unlike your usual dive watch, the Victorinox INOX doesn’t have a rotating bezel. Instead, it has a polished, domed bezel, giving the watch a solid look that’s ready for battle.

The watch has a supple rubber strap that’s comfortable to wear. It’s soft but resilient, so this is a plus point for the Victorinox INOX. Also, it matches the utilitarian appeal of the timepiece and complements its rugged appearance. The Victorinox INOX has a scratch-resistant sapphire that’s triple-coated with an anti-reflective material. This gives the watch face a very clear look as if there’s no crystal lens on it. The anti-reflective coating also makes the dial highly legible even under direct sunlight.

The INOX has a black dial and a matte finish for a clean and simple look. The homogeneity of the design is slightly blemished by the date window situated between the 4 and 5 o’clock positions. In a way, this serves the legibility of the date window because it easily stands out of the dial.

The dial has applied indices that perfectly match the shape and color of the hands. The bright-red second hand stands out against the black and silver theme of the Victorinox INOX.

When it comes to movement accuracy, the Victorinox INOX meets expectations with its precision and reliability.

The Victorinox INOX has a Ronda Caliber 715 quartz movement. A quartz movement is perfect for a tool watch that’s designed to be indestructible. No one in their right mind will put a mechanical movement that’s comprised of sophisticated components in a timepiece that’s meant to be thrown, rammed, and dropped.

But Victorinox took the challenge and created an oversized watch with a mechanical movement. Thus, the INOX has two variants: a quartz watch and a mechanical timepiece. The mechanical INOX has an ETA 2824 movement which has considerable accuracy. Here are some points to consider that will help you decide whether you should buy the Victorinox INOX or not.

The INOX stays planted on your wrist, unlike other watches with similar size that tend to move up and down while you sway your arms. This is all thanks to the shape of the lugs and the case which Victorinox really thought about to give their INOX model wearing comfortability.

The second hand doesn’t exactly land in line with the little indices on the dial. This is expected of a budget, sub-$100 watch, but it can be frustrating to see the same flaw on a mid-range watch that costs half a thousand dollars.

Another disappointing area about the Victorinox INOX is its lume. For its price, the lume is surprisingly dim compared to cheaper watches. The luminescent coating applied on the hands and the indices are too thin that they’re barely visible except when in total darkness.

Questions About The Victorinox INOX

Is the Victorinox INOX water-resistant?

Yes. The Victorinox INOX has a 200-meter water-resistance rating, satisfying expectations on a utility watch.

Does the Victorinox INOX have quartz or a mechanical movement?

The Victorinox INOX is available in two variants, one with quartz and the other a mechanical movement. The latter is more expensive than the former, thus the wide range of pricing for the INOX models which also includes women’s models.

How much does the INOX costs?

The INOX is a bit expensive for what it can offer. The watch is priced between $250 to $625, depending on the seller and the movement variant. The quartz version of the Victorinox INOX is a good buy because its price matches its performance. However, the more expensive mechanical variant can be a hard sell because of the diminishing returns you get from it. Regardless of which variant you purchase, you’ll still get a durable, scratch-resistant, and classy timepiece that more or less compensates for its flaws.