Seiko is a brand known for developing affordable and stylish watches for the low and mid-range markets. They’ve created a range of formal and casual timepieces that have become standards in their respective niches. One of their most popular creations is the Seiko SSC233 because of its iconic color and design.

If you’re into uniquely themed watches appropriate for casual use, this watch is one you should put at the top of your shortlist.

What You Need To Know About Seiko Sport Solar

The Seiko SSC233 Sport Solar is widely popular for its Halloween theme: large orange hands and hour markers over an all-black dial. Its distinctive, spooky theme gives the watch a stylish, sporty appeal. Its theme does more than add flavor to the usual boring watch face as it also makes the watch very legible. The orange and black colors make even the chronograph functions easily readable from afar.

The Seiko SSC233 Sport Solar measures 45mm wide and 12mm thick, so it has a huge and undeniable wrist presence.

The Seiko SSC233 Sport Solar is definitely non-traditional when it comes to design. Everything about this watch is black except for the hands and the markers.

It has a stainless steel case coated with black PVD. It also has overextended lugs to match the size of the watch. The Seiko SSC233 Sport Solar has a black nylon band to fit with the sporty theme of the watch.

The SSC233 has a very thin bezel with a tachymeter scale inscribed into it. However, the scale is hard to read and is added more as an aesthetic than a functional piece of the watch. 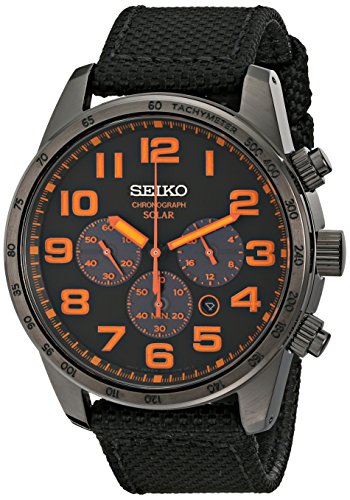 The oversized Arabic numeral hour markers stand out, thanks to its size and orange color. Near the noon position, you’ll find the Seiko name standing out in white font.

The Seiko SSC233 Sport Solar features three chronograph subdials with 60-second, 60-minute, and 24-hour scales. The second-hand functions as a chronograph hand and not as your usual second hand. For the main 60-second count, you can refer to the sub-dial on the 9 o’clock position.

The Seiko SSC233 Sport Solar has a tiny circular window located at the 4:30 position for the date display. However, it’s so small that you’ll ask why Seiko even bothered to put such a useless feature on the watch.

The Seiko SSC233 is covered with Seiko’s patented Hardlex crystal. The material is generally scratch-resistant and can withstand drops without breaking.

The crystal’s hardness is also perfect for providing the watch a 100-meter water-resistance rating. The watch is suitable for casual swimming and snorkelling, but it definitely cannot withstand the water pressure associated with diving activities.

The Seiko SSC233 Sport Solar houses a Seiko caliber V175 movement which is known for its accuracy. It has a precision of -/+ 15 seconds per month, which is way better than the ordinary quartz watch. The movement also features a 6-month power reserve, which is the average for the brand’s solar watches. Here are some points to consider that will help you decide whether you should buy the Seiko SSC233 Sport Solar or not.

The strap feels cheap and uncomfortable to wear. It’s also too small to accommodate large wrists. It’ll be better for you to ditch the stock strap and find one with better quality.

The date window is the biggest disappointment on the Seiko SSC233 Sport Solar. For one, it’s located in an awkward position. Instead of the usual 3 o’clock position, it’s at an angled place that’s a bit harder to read.

Another problem is its size. The date window is so small that Seiko shouldn’t have bothered putting one on the watch since it’s generally unusable.

The hands and markers are filled with luminescent material. However, despite having contrasting colors, it’s hard to read the time on the watch under low-light conditions because of the weak lume applied to it.

The watch is large and a bit thick, but what makes it unwearable to those with small wrists are the oversized lugs. There’s a possibility that the lugs will hang off from the wrist which is unsightly to look at.

The watch comes with a 3-year warranty which is a bit longer than the usual 2-year guarantee provided by other watch manufacturers. Is the watch scratch-resistant?

The watch has a Hardlex crystal which is said to be scratch-resistant. However, it’s not that impervious to scratches as advertised. Contact with steel and concrete will definitely put a scratch on the surface of the crystal, so avoid these objects by all means.

Is the watch water-resistant?

How often do I need to change the batteries?

The Seiko SSC233 Sport Solar has a solar-powered movement. The battery on the watch will automatically recharge upon exposure to any light source. Unlike ordinary quartz watches, it will take several years before you have to replace or repair the batteries on this timepiece.

Overall, the Seiko SSC233 Sport Solar is an exciting sport watch that you can’t overlook. Priced around $175 to $350, this wonderful all-rounder has a bold and eye-catching theme that’s easily noticeable by everyone.

Other than the date window, the Seiko SSC233 Sport Solar is an okay casual watch. It’s not as versatile as other Seiko creations, but it will pass as a sports watch because of its chronograph feature.

If you aim to flaunt the stylishness of the Seiko SSC233 Sport Solar, then this head-turning watch is definitely for you. However, if you’re looking for a functional timepiece, you may want to look into other watches.