The SKX series is one of the mainstays of Seiko Prospex ‘Turtle’ in the budget diving watch range. However, there seems to be a newcomer that can go head-to-head with the SKX models.

Enter the SRP77X series – a model that’s said to be a step better than the SKX series, but remains to be below the price of the costlier Sumo models.

A Divers History Lesson On The Seiko Prospex Turtle SRP77X

If you’re familiar with diving watches, you probably heard about Seiko’s plan to re-issue the popular “Turtle” model.

The Seiko SRP77X is also called the “Turtle” because of its large case that’s shaped like a turtle shell. The size alone makes the SRP77X Turtle easily recognizable even from afar.

Like other watches made by Seiko, the company didn’t give the moniker “Turtle” to the SRP77X. But the watch community stuck with the nickname as it sounds better than pronouncing the S-R-P-7-7-X every time the watch is mentioned.

The design of the SRP77X Turtle came from the old Seiko 6309 which was a popular dive watch back in the 70s and 80s. Both the old model and the homage SRP77X timepiece share numerous aesthetic similarities including the iconic oversized crown on the 4 o’clock position.

The Seiko SRP77X is a mainstay among the company’s precious collections, comfortably sitting between the SKX007 and the Sumo series. 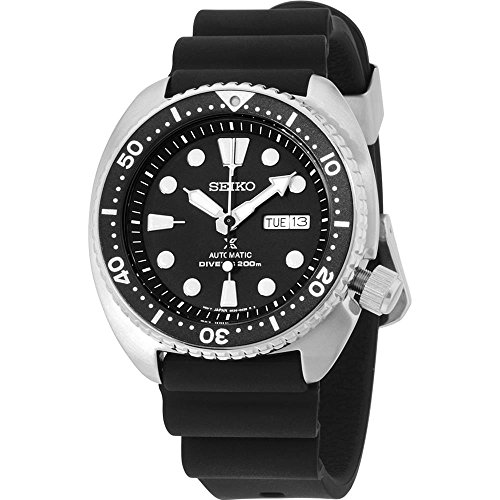 The Seiko SRP77X measures 44.5mm wide and 14mm thick, so it’s huge and not for those with really small wrists. However, the cushion case helps fit the watch to almost any wrist size, so long as it’s not too skinny.

The case of the watch features a mix of brushed and polished surfaces, similar to many of the watches that belong to the SKX series.

The watch comes with a rubber strap measuring 22mm wide. The strap is soft and pliable, making it very comfortable to wear.

The Seiko SRP77X’s 120-click bezel has 10-minute demarcations and a luminous pip at the noon position. At close inspection, you’ll notice that the bezel is slightly sloped inward which helps in improving readability. The grooved bezel provides exceptional grip even when you’re wearing gloves. The watch features a solid-colored dial that helps improve the legibility of its face. On the 3 o’clock position, you’ll find a day-date window in a readable size.

The hour markers show a mix of circular and trapezoid shapes with a very thin silver outline to give them a bit of texture. The markers are generously filled with Seiko’s Lumibrite material to give a sufficient glow under low-light conditions.

The Hardlex crystal protects the dial from scratches and bumps. This material is also cheaper than sapphire, which helps bring the overall cost of the watch at more manageable levels.

The SRP77X Turtle features the in-house Seiko calibre 4R36 automatic movement. It has 25 jewels and beats at a rate of 21,600bph. It has a 40-hour power reserve, a hand-winding function, and a second hacking feature.

The movement is perfectly suited to the SRP77X’s purpose of providing an affordable diving watch. With a reported accuracy of +/-5 seconds per day, you’ll find the precision and functionality of the watch adequate for its price.

Here are some points to consider that will help you decide whether you should buy the Seiko SRP77X Turtle or not.

The Turtle is available in the following variants: the Gilt with its black and gold theme; the Blue with its blue and white theme; the Pepsi with the popular combination of blue, red, and black; the Coke with its red and black mixture; the PADI with its almost Pepsi tone, except that it has a blue dial; and the eye-catching Batman which features a blue and black color combination.

The bad thing you might notice with the SRP77X Turtle is the possible misalignment between the chapter ring and the bezel. But this won’t probably matter unless you have OCD and you can’t overlook this almost negligible flaw on the watch. Also, the chapter ring shows 5-minute demarcations and second markers that align perfectly with the movement of the second hand, so this just evens out the flaws of the watch.

Although the SRP77X Turtle is humongous, it surprisingly sits comfortably on most wrist sizes, thanks to the cushion case design that looks like the back of a turtle. It also feels balanced despite its size and weight, and this tells you a lot about how Seiko thought deeply about the design of the timepiece.

Is the Seiko SRP77X water-resistant?

Is the SRP77X better than the SKX series?

The SRP77X is often compared with the SKX007 or SKX009 because of their somehow similar shape. However, the SRP77X beats these two watches in almost every aspect. The SRP77X has better movement and more variety of available designs. The strap of the SRP77X is also more comfortable to wear compared to the plasticky feeling of the SKX’s rubber strap.

Overall, the SRP77X is probably the better pick between the two models.

How much does the SRP77X costs?

The SRP77X Turtle’s price ranges from $350 to $500, depending on the variant. At $350, you can consider the SRP77X a good deal because of the numerous features this watch presents.

The Batman variant is the most expensive because of the high demand for it, while the Gilt is the most affordable in the series.

The SRP77X is an absolute must-have for diving watch collectors. It has a classic design inspired by vintage models, a reliable movement, and a sturdy build that can last for decades.

The Seiko SRP77X strikes the perfect balance between functionality, aesthetics, and price. Once you wear this budget diving watch, you’ll surely leave your luxury timepieces tucked in a box to gather dust.

If you have more legroom to spend more on a watch, get the Seiko SRP77X and grace your wrist with something that oozes of quality.