Did you catch Arnie wearing the Seiko SNJ025? maybe you are thinking of buying one but you are unsure if its still worth it in 2021. We answer all you questions and more in this article.

You’ll often find various kinds of watches that celebrities wear in movies. The watches are often part of the set and are subtly promoted by having the lead stars wear them throughout the film.

One notable watch that caught the eye of moviegoers is the Seiko H558-5009 seen on the iconic Predator movie. Although the model has been phased out by Seiko, its predecessor, the Seiko Prospex SNJ025, is more than ready to take the mantle.

History of the Arnie Watch and How It Got Famous

The Seiko Prospex SNJ025, more popularly known as the ‘Arnie’, was named after the one and only Arnold Schwarzenegger. The actor starred in many high-octane movies like Commando and Predator and became the image of action films.

During the screening of the Predator, Arnold wore a Seiko H558-5009 ani-digital dive watch which became a widely popular timepiece back then. It became a hit because of its hybrid dial design that’s a bit unusual for its time.

So how is the Seiko Arnie connected to any of these?

The Prospex SNJ025 “Arnie” is described as the modern version of the Seiko H558-5009. It retains the hybrid dial design, but with updated components, better build materials, and improved functions. 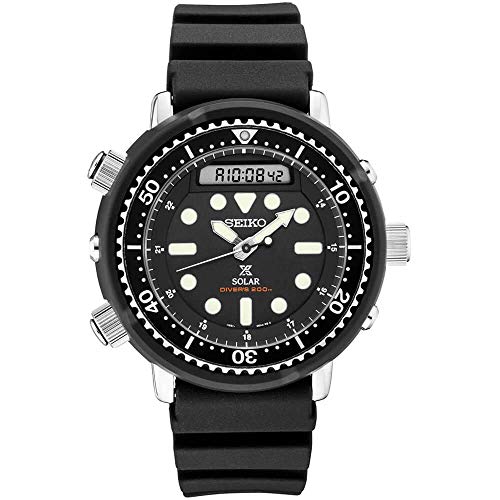 The Seiko Arnie measures 47.8mm wide and more than 14mm thick. It’s gigantic, bold, and rugged, much like the characters the actor played whom the Seiko Arnie got its name. When it comes to wrist presence, this watch is definitely one of the top contenders out there.

The watch has a silicone strap that matches the rough look of the Seiko Arnie. Its black color is perfect for a military-style watch since it gives a no-nonsense, unapologetic appeal.

The Seiko Arnie has a unidirectional rotating bezel that clicks nicely. It’s not too loose that there’s play, but it’s not too stiff that it’s hard to turn. The bezel has 10-minute markings and is designed in a way that fits the standard for diving watches.

You’ll find two pushers on the left-hand side of the watch. They’re used for configuring the time, calendar, alarm, and chronograph functions of the watch.

The Seiko Arnie has a hybrid dial with both analog and digital displays.

The digital display provides information such as the date and chronograph readings. The analog dial has the usual embossed index hour markers and chunky, arrow-shaped hour and minute hands. The second hand perfectly lines up with the markings on the chapter ring.

The dial is protected by a Hardlex crystal that’s durable and scratch-resistant. This is the standard lens used by Seiko to help bring down the cost of their watches. You don’t have to worry about its durability because the Hardlex crystal has been tested to withstand your usual bumps, drops, and scratches.

The Seiko Arnie is powered by the Seiko H851 solar quartz movement. This is a hybrid movement that enables a digital display and an analog hand movement. The watch boasts a six-month power reserve, thanks to the innovative solar quartz mechanism. Here are some points to consider that will help you decide whether you should buy the Seiko SNJ025 Arnie or not.

The adjustment holes on the strap are also too large to provide an exact fit on the wrist. You’ll either have it too tight or too loose, neither of which makes the watch comfortable to wear. You’d be better off replacing the strap with a NATO or canvass one with improved adjustment features.

Another thing that makes the Seiko Arnie cumbersome is how you have to go through a lot of hassle to operate the complications. First, you’ll have to unscrew the crown guards to use the pushers for the chronograph function. Combining the pushers and the trigger for the backlight is also not a good idea because this means you cannot simultaneously activate the chronograph and the backlight functions.

Despite the huge size of the Seiko Arnie, its display is somewhat disproportionate. You’ll probably have a hard time seeing the watch readings at a glance, even under perfect lighting.

When it comes to design, the Seiko Arnie stays true to its masculine, military-like look. It has the rugged appearance of a tool watch that’s designed to withstand anything you throw at it. It has the star quality and attractiveness of its predecessor, making it a perfect collectible watch with a good history behind it.

Is the Seiko Arnie water-resistant?

As a diver watch with screw-down crowns, the Seiko Arnie delivers satisfactorily. It has a water-resistance rating of 200 meters, which is good for casual diving activities. It’s not designed though for scuba diving and other deep-water sports.

Where is the Seiko Arnie made?

The Seiko SNJ025 “Arnie” is constructed in China. It’s still under the Seiko Prospex line, but the watch isn’t assembled in Japan.

What are the color choices available for the Seiko Arnie?

The Seiko Arnie comes in three color variants, including an all-black design and a Pepsi bezel model.

Overall, the Seiko Arnie is a disappointing underperformer for a tool watch. It’s supposed to make you feel more confident and look like an action hero, but the watch seems more of a burden than an asset that you can be proud of.

Its price amounting to half a thousand dollars only make things worse. If you’re a collector with lots of money to spend on a toy watch, then the Seiko Arnie might be worth adding to your collection. Otherwise, it would be better to spend on a more reliable and practical timepiece with similar (or even better) functions.