Seiko Mini Turtle – Why We Love It

The Seiko SKX007 is a vintage diver watch that was first released in 1996. This Seiko model instantly became the definition of what an affordable diver watch should be: classic design, exquisite finish, excellent features, and all for an incredibly low price.

But despite being one of the most popular watches Seiko has ever created, the brand discontinued producing this model.

The good news is there’s an heir to the throne of SKX007 – the SRPCxxK, more commonly known in the community as the Seiko “Mini Turtle”.

Seiko never named the model as the Mini Turtle. It was the fans that made up the name because of its similarity to the “Turtle” model.

So, if it’s the smaller version of the Turtle, how come people are saying that it looks more like the SKX007?

The Mini Turtle and the SKX007 have almost the same size and appearance, except of the crown position and the turtle-shaped case. The Mini Turtle also sports a vintage appeal similar to that of the SKX007. Many people mistake them for twins, but being siblings that come from the same lineage, it’s not unusual to mistake one for the other 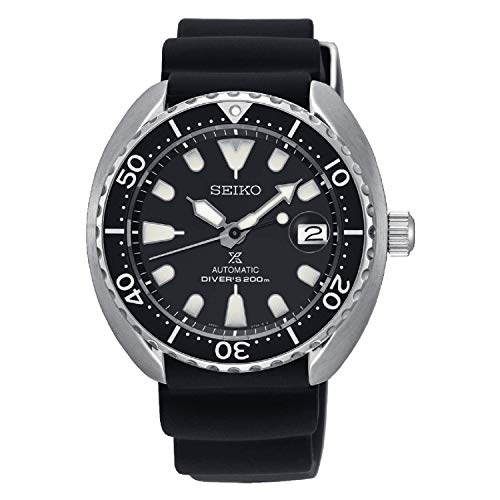 The Mini Turtle has a stainless steel case that’s shaped like the house of a turtle. It is brushed on the top portion and polished on the case back. The shape of the case makes the watch look a bit bulky, but not as much as the one found on the Turtle.

The lugs of the Mini Turtle are better than that of the Seiko Sumo. They’re shorter and closer to the case, reducing the noticeable gap found on the Sumo’s lugs.

The notches on the bezel are similar to that of the SKX007 and for a bad reason. The coin-edge bezel is hard to grip, and it just gets worse when you wear gloves.

Unlike the SKX007 and its Turtle predecessor wherein the crown is located at the 4 o’clock area, the Mini Turtle’s crown is positioned at the 3 o’clock position. The crown is unguarded unlike what you usually see in diver watches. Its position makes it somehow more vulnerable to damage or accidental adjustments.

The crown is designed a bit differently compared to the Turtle, but it works the same way. You have to push it in and rotate clockwise to lock it. You’ll hear a soft click when you lock or unlock the crown, indicating that you’ve properly engaged the screw tracks.

The Mini Turtle has a date complication on the 3 o’clock position. On top of it is a mounted cyclops lens similar to those found in Rolex Submariner models.

The Mini Turtle has tombstone-shaped hour markers with a V-shaped one placed on the noon position. Although the different shapes of the hour markers give the watch a distinct look, the lack of cohesion makes the dial look cramped.

The pattern design on the dial differs depending on the model variant. Some have a plain one, while some have a wavy pattern.

The watch face is protected by Hardlex crystal which is quite resistant to scratches and can survive bumps and falls.

The Mini Turtle is equipped with a Seiko 4R35 quartz movement that allows hand-winding and seconds-hacking. It also boasts a 41-hour power reserve which is the average duration automatic watches can last without winding. Here are some points to consider that will help you decide whether you should buy the Seiko Mini Turtle or not.

The Mini Turtle’s lume is bright green and glows nicely even underwater. The hands and index markers are filled with Seiko LumiBright and they glow brightly under low-light conditions.

The Mini Turtle is currently priced around $300 to $350. If you compare it with the classic SKX007, you’ll be disappointed because it’s more expensive. However, considering the overall build and performance of the Mini Turtle, it’s not a bad price at all. You can say that it’s a steal since you’ll get a heavy-duty diver’s watch that performs as good as costlier models.

Is the Seiko Mini Turtle water-resistant?

Absolutely. It’s specifically designed for diving purposes, much similar to its predecessors and siblings from the same watch family.

You can dive with the Mini Turtle up to a depth of 200 meters underwater. The watch’s screw-down crown helps a lot in increasing the water-resistance rating.

Is the Mini Turtle made in Japan?

The Mini Turtle models mostly end with a “K”, so it’s more likely that they’re made in either Singapore, Malaysia, or South Korea. Model numbers that end with a “J” are said to be made in Japan and have a bit better finish compared to the K variants.

But in terms of overall quality and appearance, they’re almost identical that you’ll have a hard time differentiating one from the other. Both models are made of high-quality components, so rest assured you’re getting a reliable timepiece regardless of where the Seiko Mini Turtle is made from.

Can I change the strap of the Mini Turtle?

Yes. Although there are different variants of the model that comes with distinct strap types, you can just stick with one variant and switch the strap yourself with the help of tools.

The Seiko Mini Turtle is a good alternative to the discontinued SKX007 line. It has the shape of the Seiko Turtle, but has the size and feel of the SKX007. Its features are definitely made for diving, so there’s no need to worry about this watch’s functionality.

If you’re looking for an affordable, mid-range diver watch that has all the features you see on more expensive brands, the Mini Turtle is a good candidate to consider. Although it can’t beat the value for money of the SKX007, it’s still a strong contender in the price range, especially since it comes from a trustworthy brand like Seiko.

1 thought on “Seiko Mini Turtle – Why We Love It”