Bulova Computron Overview – The Blast From The Past

Bulova is known for bringing vintage-inspired watches to the market at affordable prices. The company recently re-released its Lunar Pilot Chronograph “Moon watch” and also reissued the classic “Devil Diver” that originally graced the market in the 1970s.

Just this 2019, they revived another classic from their collection: the Bulova Computron.

Brief History On The Bulova Computron

The Bulova Computron is known for its nostalgic design. The watch was also named the “Trapezoid” because of its iconic shape.

With the usual watch, you need to flick your wrist to see the face and tell the time. The Computron, on the other hand, has its digital display at the side of the watch, which means you don’t have to twist your wrist to tell time.

So, what led Bulova to create this oddball timepiece?

The Quartz Crisis was a bane for traditional watchmakers that were focused on creating mechanical timepieces. The wave of cheap, battery-powered quartz watches was sweeping the world at that time and the established manufacturers of mechanical wristwatches were facing the risk of getting overrun by the more practical counterparts.

During this time, the Computron was Bulova’s solution to remain relevant and interesting amidst the declining interest in mechanical watches. By creating a uniquely designed timepiece, Computron managed to stand out of the competition and even became one of the most quintessential watches ever made.

If you love this futuristic masterpiece and you are looking for the new re-issue color options the computron comes in then you are in the right place. There are currently 3 colors which are Gold, Silver, and Stealth Black like something you see out of one of the Alien movies.

Personally, the Stealth black looks like an incredible watch that can be worn in many different situations. if you want to get that “tron feel” of the 70’s then the chrome with blue digits may what you are looking for in this watch, and of course, you have the traditional gold with the red digits, the classic Bulova Conputron that many searched for in pawnshops and eBay around the nation to get one of the original pieces.

Thanks to the re-issues you get a brand new watch that has all the LED digits in full working order with a slight rehaul of its rigid design. 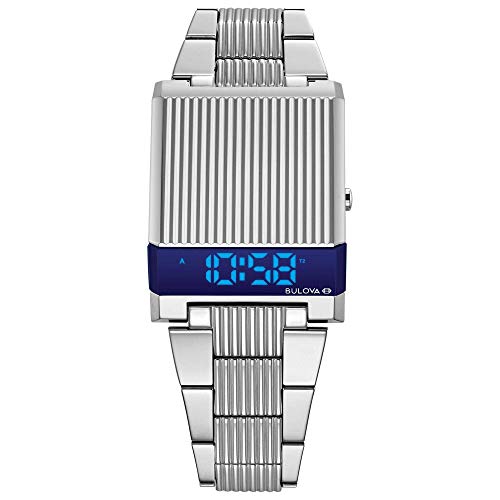 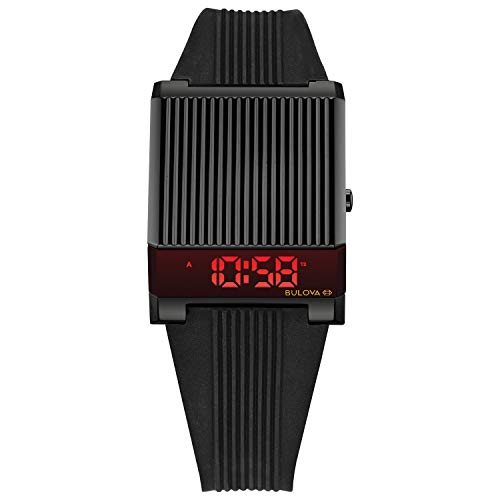 The original Bulova Computron came out in the 1970s. It’s known for its retro-futuristic design that looks like it came out straight from a sci-fi film. The trapezoidal shape of the watch case adds to the oddly vintage charm.

Recently, Bulova reintroduced the Computron model and it has almost every feature the original model had. The new model even works the same way as the old one, so you have to press a button to display the time and the date.

Why not just display the time 24/7 without having to press a button? Why make it harder for people to read the time?

During the 1970s, battery conservation was a problem. Bulova designed the Computron to have an on-demand screen display to save battery. Pressing the button once displayed the time for 5 seconds. Subsequent presses displayed the date, day, and the additional time zone.

With the new model, the same mechanism was retained to preserve the original functions that the classic Computron from the ‘70s had.

The new Computron model replaces the old digital display with a brighter and more reliable LED one. It’s also available in three different colors to suit every style.

There’s the gold-tone version matched with a red LED to give off an old school vibe that’s hard to miss.

The stainless-steel version with a blue LED presents a more contemporary appeal. Its color makes it versatile for both casual and formal use.

Lastly, there’s the black version with a red LED that looks like it’s something that the Terminator will use. This version has a black rubber strap, unlike the other variants that feature a metallic band. This complements the retro-futuristic appeal of the watch that customers that have lived through the 1980s will surely love.

The display is protected with a mineral crystal that’s resistant to scratches. The case is also made of stainless steel, so it’s sturdy and durable.

The Bulova Computron runs on a quartz movement which is more accurate than a mechanical watch.

The top of the watch where the face is usually found is adorned with shallow grooves to add character to an otherwise plain design.

The watch measures 31mm wide and almost 14mm thick. Even though it has a rectangular design, the Computron sits unexpectedly comfortable on the wrist.

How does it Standup to Today’s Standards

If you are in love with the iconic Bulova computron style then don’t let me sway your decision, however, I have come up with a few real-world opinions based on its design to see if this watch stands up to today’s standards.

Here are some points to consider that will help you decide whether you may want to get a hold of the original or Re-issue Bulova Computron or not. The Computron has a button on the side of the case which enables you to rotate between the time and date displays. You won’t see anything on the display unless you press the side button on the watch. This might be a downside since you’ll need both hands to tell the time.

What if you’re in the movie theater and you need to look at the time? You wouldn’t want to press the watch with your other hand filled with salt or cheese from the popcorn, right?

This concept may have been a great idea in the 1970s, but it’s impractical now that watches are designed to spend the minimum amount of energy required to run. Still, the loyalty of Bulova to stick with the original design is commendable because it made the watch a timeless classic.

The Computron is made from stainless steel and looks built for rugged use. It also has a scratch-resistant mineral crystal to protect the LED screen. Generally, the watch will survive drops and bumps without suffering considerable damage.

Computron’s new LED screen emits brighter colors than the original model. The good thing about this is that you don’t need a backlight to read the time since the LED is bright enough to see in the dark.

Which one will you choose?

Is the Computron water-resistant?

The watch is water-resistant up to 30 meters, so it’s not the ideal watch to wear for swimming. Occasional water splashes are okay but prolonged submersion can damage the watch.

Is the Computron watch heavy on the wrist?

The watch weighs around 80g, so you’ll slightly feel its weight on your wrist.

How much does the Bulova Computron costs?

The Bulova Computron is priced around $250 to $300. It’s an affordable timepiece that’s reminiscent of the ‘70s when the industry was transitioning from mechanical to quartz movements. The Bulova Computron is an accessory that’s unlike anything you’ve seen before. Its unusual presence is a statement that will surely leave an impression on anyone who sees it.

The Bulova Computron is a nostalgic timepiece that’s worth buying to add to your collection. It’s okay for occasional use and as a conversation starter, but the on-demand display can be impractical at times.